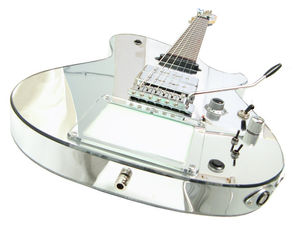 This guitar made its public debut for the Later Live... with Jools Holland performance on the 15th of September 2009. It is the first of Matthew Bellamy's guitars (apart from Rust Relic) to have a string tree on the headstock.

It was also the first since the M1D1 to have a kill switch and the first to have a push button rather than a toggle switch.

The Mirror Kaoss was rarely played live, probably due to the weight. This was the first of three guitars Tim Stark at Mansons made for Matt.