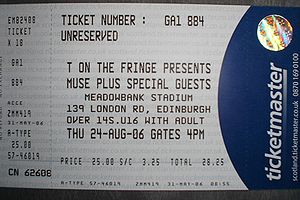 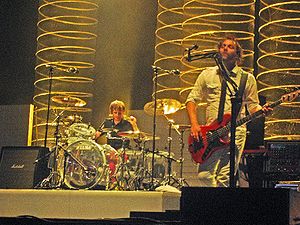 Attendees had to have been over 14. Those under 16 must have been accompanied by an adult.[3]

Bellamy's guitar malfunctioned during Time is Running Out.

When his guitar malfunctioned during Time Is Running Out, Bellamy said "Stop stop stop stop stop stop guys stop. My guitar is fucked, gimmie a second, gimmie a second", and the band stopped playing.[4][5] Howard then said "Well we've got to try and play it right at least", and Bellamy followed with " Yeah we've got a new guitar tech, he's just learning. Howard then said: "Yeah". Bellamy continued to say: "Yeah he's doing a good job though. Doing a good job". Once the problem had been resolved Bellamy strummed his guitar a couple of times and then said:" Right Ok!" and they started the song again.

Bellamy asked "Are you guys alright, yeah?" due to crowd agitation before Butterflies and Hurricanes.