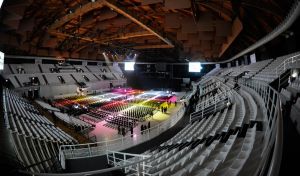 Unipol Arena, previously known as PalaMalaguti between 1993 and 2008 and Futurshow Station between 2008 and 2011, is an indoor sports arena in Casalecchio di Reno, in the province of Bologna, Italy. The arena was designed by Studio Arco, an architectural studio, and was built in 1993. Up until 2016, it had a maximum capacity of 8,278 but in 2016, the capacity was doubled to 20,000 (standing). It is the home arena of Virtus Bologna basketball team.

During 2008, the arena underwent restyling works, including a museum, dedicated to teh Virtus Bologna team history. The arena also had four new JumboTron screens installed, together with a new parquet, seats and stairs. In 2011, the arena was renamed to Unipol Arena in a name sponsorship deal.

In 2016 the arena was connected to a train station, two new museums were built, one dedicated to Futurshow and another dedicated to opera singer Luciano Pavarotti. With it also came capacity upgrades.