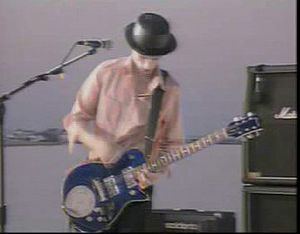 Muse played on the side of Cannes Canal[1] for the Cannes Film Festival.[source?] The performance was filmed for television[1] and broadcast over Nulle Part Ailleurs.[source?] Only one song is known to have been broadcast – Showbiz, however several other songs were played.[3] It is unlikely that the remaining performances will ever surface.

For this performance, Matthew Bellamy used a Gretsch G1627 Synchromatic Sparkle Jet with a hypnotic disc attachment. At the end, he pushed his guitar and amp over the edge of the platform on which Muse had performed.[2]

A video of Showbiz was broadcast by Nulle Part Ailleurs. A copy of this can be found here[registration needed].