The Big Day Out (BDO) is an annual music festival that tours Australia and New Zealand, it occurs at the end of January into the start of February. It visits the cities of Adelaide, Auckland, Gold Coast, Melbourne, Perth, and Sydney.

Muse have played at the festival twice, and are due to headline the 2010 event.

Muse played their first Big Day Out in 2004, as part of the Absolution tour.

Muse performances at Big Day Out:

Other notable acts included: The Strokes, Metallica, The Mars Volta, The Flaming Lips

Muse again played Big Day Out in 2007 as part of their Black Holes and Revelations tour. They were the second headliner behind Tool, and played on the blue stage.

Muse performances at Big Day Out:

Other notable acts: Tool, My Chemical Romance, The Streets, The Killers, The Vines 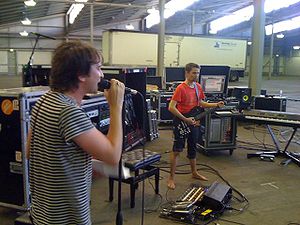 Muse have headlined the 2010 Big Day Out as part of their The Resistance tour. They've also performed a cover of Back In Black (Originally written by AC/DC) with Nic Cester. Other notable acts include: The Mars Volta, Powderfinger, Lily Allen, Mastodon