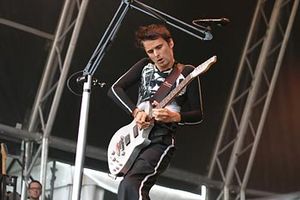 Matthew Bellamy with his Manson Delorean during the New Born solo

The most well-known of Muse's shows down under for the travelling Big Day Out Festival. Other bands on the tour included Metallica, The Strokes, The Mars Volta, Hoodoo Gurus, or Dandy Warhols. For this particular year, there were two Big Day Out events held in Sydney, with the same bands playing the same time slots on both days. It was stated that the reason for there being two dates was overwhelming demand for tickets in Australia's largest city. It was stated further that more tickets could be sold but it would get so squashed and crowded.[source?] The second day, Muse played basically the same songs, but in a different order. For example, "Stockholm Syndrome" was played last on the second day, and "Hysteria" was the set opener.[source?]

Bootlegs and TV broadcasts can be found on Microcuts.net and Muselive.com. Six songs from this day's performance were released as a bonus disc on an Australian only re-release of Absolution.

An interview of this gig is available here.