Difference between revisions of "The Handler (song)" 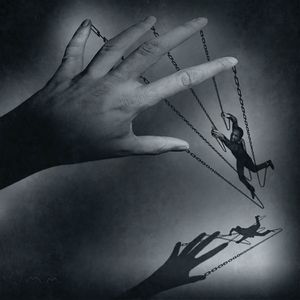 According to Matt “The Handler” are those agents who try to control people, the song and especially the word “Trance formation” it’s a reference to “Trance Formation of America” by Cathy O’Brien, a book about 40’s to 70’s CIA experiments in brainwashing that matt read.[1]

It premiered on BBC Radio 1 on June 1st, 2015 and was later avalible to download for those who pre-ordered the album. It is a dramatic song with falsetto vocals, heavy octave/arpeggio riffage and an intense middle section.

The Handler features a middle section that harks back to In Your World, as well as the title track of Showbiz, and Matt says "The lyrics are almost a question-and-answer with that song."[2] This is most definitely a reference to the line "I won't let you control my feelings anymore", as a similar line can be found in the song Showbiz.

In this song, the hero of the story realizes that he doesn't want to be controlled[3] and begins to rebel. Matt makes frequent use of his falsetto in this song. It features a long a solo riff, and the drums have been described as slow and massive.[4]

You were my oppressor And I, I have been programmed to obey Now, you are my handler And I, I will execute your demands

I won't let you control my feelings any more I will no longer do as I am told I am no longer afraid to walk alone Let me go, let me be

I'm escaping from your grip You will never own me again