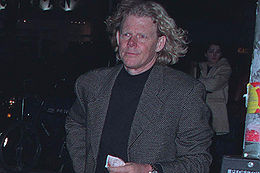 Robert John "Mutt" Lange is a British record producer and songwriter, born in Zambia. He has worked on albums with artists like AC/DC, Shania Twain, Bryan Adams, Billy Ocean, The Cars, Def Leppard, Maroon 5, Nickelback and others. Lange has also worked on Lady Gaga's song You and I from her album Born this way and has written several songs from artists like Billy Ray Cyrus to Carrie Underwood.

Later in a German Interview with Ticketmaster, Matt said that working with Robert was a "long-cherished dream" because they "have always been big fans of his work". According to Matt he "He's a visionary, a man who uses the newest technology to create traditional, timelessly good music" and that he helped Matt with feel "comfortable with it all the bands he grew up with", making a reference about "Guitar solos" on which Matt thinks are uncool.[1]

He also sang backing vocals with Matt on a song called Aftermath.

Go back to Drones (album)