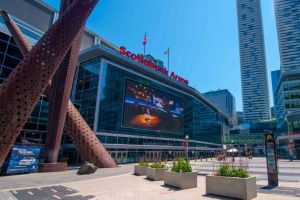 Main entrance of the arena

Scotiabank Arena, formerly known as Air Canada Centre is an indoor multi-purpose arena located in Toronto, Canada. Opened in February of 1999, it was designed by Brisbin Brook Beynon Architects and HOK Sport. The arena is located at the land of Toronto's former inner harbour. In the first half of the 20th century, a postal building was built on the site of the harbour. In the late 1980s, Canada Post closed the facility and in 1993, the building was purchased by The Toronto Raptors. The arena underwent a renovation in 2003, which included a new LED signage system. In 2015, another renovation took place, including an installation of a new scoreboard. In 2014, a group of life-sized statues of former Toronto Maple Leafs players, known as Legends Row, was installed outside the arena. These include Ted Kennedy, Johnny Bower, Darryl Sittler, Borje Salming, Syl Apps, George Armstrong, Mats Sundin, Dave Keon, Turk Broda, and Tim Horton with statues of Red Kelly, Frank Mahovlich, Charlie Conacher, and Wendel Clark unveiled in 2017. The arena is owned by Maple Leaf Sports & Entertainment Ltd., a Toronto-based real estate company. It's maximum capacity sits between 5,200 and 20,511, depending on the event.

The Scotiabank Arena is home to many sports teams; Toronto Maple Leafs of NHL, Toronto Raptors of NBA, Toronto Rock of NLL and Toronto Marlies of AHL. In 2001 and 2002, Toronto Phantoms of AFL also called the arena their home, until they were disbanned. Sports event that took place inside the arena include the 2000 NHL All-Star Game, the 2016 NBA All-Star Game, the 2004 and 2016 World Cup of Hockey, the 2015 World Junior Ice Hockey Championships and many UFC events, amongst others. It also hosted the sixth season of the Summer North American Championship Series of League of Legends. Musical artists who have performed in the arena include Green Day, Hugh Jackman, Hans Zimmer, Billy Talent, My Chemical Romance, Elton John, Pearl Jam, Gorillaz, LCD Soundsystem, U2, Travis Scott, Nine Inch Nails, Bob Dylan, Linkin Park and more.

Since The Resistance tour, Muse have performed in the arena on each headlining tour.