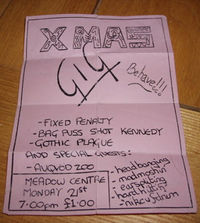 Matthew Bellamy had already joined Gothic Plague by this time.[2] Dominic Howard later recalled that Gothic Plague and Fixed Penalty started doing gigs at the local community centre together shortly after Bellamy joined the former.[3] He may have been referring to the Meadow Centre.

It is not known what songs Gothic Plague and Fixed Penalty played, but Howard later implied they were cover songs rather than songs written by the respective bands.[3] Bagpuss Shot Kennedy's set on the other hand included Shoppers Paradise by CARTER USM and Don't Let Me Down Gently by The Wonderstuff.[2]

The former drummer for Bag Puss Shot Kennedy, Chris Venning, confirmed on 12/21/18 that Gothic Plague performed a few Nirvana covers as well as "Should I Stay or Should I Go" by the Clash. He also stated that Bag Puss did "Kill Your Television" and "Grey Cell Green" by Ned's Atomic Dustbin, a song by Mega City Four and a song by Chumbawumba.