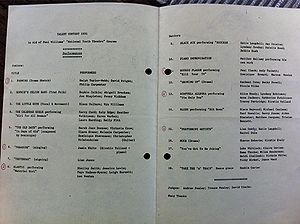 On the 18th September 2012, Matt Bellamy posted a picture on his twitter account of the itinerary for a Talent Content in 1991 at a National Youth Theatre show, of those on the set list were Gothic Plague with Dominic Howard performing "Kill your TV", Matt Bellamy performing his own piano composition, Perhaps the same composition I play at school[uncertain], and Christopher Wolstenholme performing in an outfit called The Old Days performing "In Days of Old". This was sent to him by an old school teacher that he bumped in to on the train.