I know the source is the guy on MMB, but Matt always said on interviews that they won that contest. I'm confused :) --deborah X

well, I don't know that battle of the bands :) On this article or in the interview disc you can read about the one they won; their "first gig ever", and "the only one with the RBD name". The guy on MMB said they were known as RBD :/ --deborah X

I must be blind. Nevermind, that's clearly about the final. Media mentions would be good though, since there was no solid date on muse-official's gig database, it's impossible to abduce (that really should be a verb) which of the three 1995 Cavern gigs this is. --Tene 16:34, 30 January 2008 (GMT)

The following flyer came from a website about the history of Exeter Cavern. The year has to be 1995 because that's the only year in the 1990's where Jan 23rd was a Monday. This has to be the gig that Muse lost to Honey Sucks for the title, not in March. 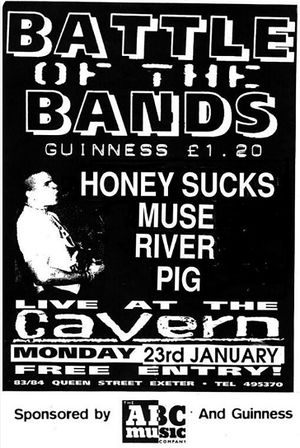