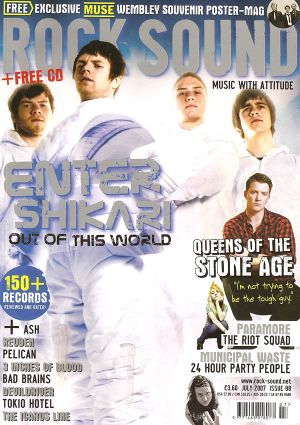 "We want to do music as much as we can and we hope it will lead to something else - I think we're capable of it."

Right from the early days when Muse were barely out of stripy tops and bobbed hair-cuts, Matt Bellamy had conviction as his words from an unpublished early interview recall. Like most bands on the Exeter scene in the mid-90's, Muse were regulars at the Cavern Club, both giggling in the shadowy corner by the mixing desk trying to hide the pints they weren't old enough to drink and on stage, playing any support slot that was thrown at them. Back then, the sparks of early genius set them aside from many of the other 'local' acts. Now, as they set about engaging two nights gracing the new Wembley Stadium's stage, it's hard to imagine the polished perfection of the Muse stadium act - complete with full-on futuristic light show - was once three Teignmouth boys with a wash of effects pedals, a dream, and the possibility of achieving it.

More switched on than most young bands, Muse followed the invaluable advice of early supporter Dennis Smith who ran The Sawmills Recording Studio in Cornwall and recorded a demo for the band for free.

"We got ourselves played on the evening sessions - there were always a lot of positive things happening but it was all very gradual," remembers the flamboyant frontman. "Dennis met up with his partner in London and invented a production company. We had this plan to use record companies to licence our albums off us so we don't have any record companies telling us what to do. The best advice we had from Dennis was not to move to London too quickly and to keep working on it from home, to build up a following. We played Manchester In The City and there were a couple of interested American labels, which was quite weird at the time as we all had full-time jobs - I was a painter and decorator. We were getting offers of deals and having to fly out to New York and LA. We ended up getting signed to Maverick and we'd go off to America and come back to our jobs. We were getting treated better than we've ever been treated since! They were taking us to the Oscars ceremonies!"

While the trio, completed by bassist Chris Wolstenholme and drummer Dominic Howard, were attracting international attention, they were also grabbing column inches in Rock Sound - and we've had our beady eyes on them since our presses first started rolling! Catching our attention with the striking debut Showbiz in '99, the trio graced the exposure of pages of issue three and our then-editor Will Luff only just made it back from the On The Road feature, issue seven! During the early years, the boys made the most of life on the road and had a few rock 'n' roll moments.

"We lost it the other day in Munich" Matt Bellamy told Darren Taylor in issue 14. "We went all that way to play a gig and we got pulled at the last minute. The reason why we couldn't play was because the PA system turned up too late. We were supporting No Doubt, they played and we were just sat in a dressing room for 12 hours. It was a real shambles and we just trashed the place. There's a bill for £3,000. Basically there were fridges, tables, chairs and bottles of wine, but the damage we really did was throwing the fridge at the wall a few times and the wall sort of... broke." They even admitted to throwing a TV out of a window to "help a seedy old record company geezer with his rock 'n' roll moment".

Matt would later reflect on te situation: "When we were touring around the world with 'Origin Of Symmetry' we definitely got a bit loose, enjoyed that whole side of touring life, and the kind of things you think it's all about. That's definitely a reason not to do it though - it never was the reason we formed a band... We don't do that sort of thing anymore; we haven't been on tour for a year anyway and now we're playing all these quite large gigs and there's quite a lot of other stuff to think about, like the show. In some ways it is a bit more serious."

Just as the trio's mentality towards touring has changed, Matt's perspective of other worlds has developed. Way back in issue 13, he was airing his theories on alien life-forms: "Virtual Organisms is a book about how the universe was created and it goes on to say what life is and the direction we're going in terms of evolutions. The universe is pretty big, isn't it? There's gotta be something else out there." And by issue 53, marking the release of third album Absolution, these theories were firmly taking shape...

"Our DNA was mixed with a species from outer space and apes; we're a mixture of the two. That's probably the reason why we have all these animal instincts and more advanced thought, and the conflict between the two. The comet that visits us every few thousand years has beings on it. They're like our god and I find that the most believable form of God - some other being who made us for the sake of mining some mineral that they need. I think that is the most probable explanation for why we're here." Von Daniken (author of Return To The Stars) rather than Darwinism had captured Chris' imagination too.

"The basic Bible and all the things it stands for is irrelevant and a more scientific point of view definitely seems more probable and more likely to be something you can actually believe in." said the bassist. "It's more real and the Bible seems to be something you'd read as fantasy, it doesn't mean anything."

"Back then, people were trying to go to the limits of their thinking. They were using words that were of their time and those words don't relate to modern language, that's the problem," considered Matt. "When people use words like 'heavens', really nowadays, you'd use the word 'space'. The ideas beind the Bible are probably quite interesting and people that believe the Bible all live their lives in different ways; some of them like George Bush start wars and other people sacrifice everything they've got to go and help the third world. Within the Christian faith there's a wide variety of people who use the word 'religious' to justify what they are doing and it can be used for both ends: pure evil and pure good. Either way, anything that is written by a man - he's just a man isn't he?"

Try telling that to the fanatical Muse following, as right now these three unassuming blokes from Devon have seen themselves elevated to superstar status, making it damn-near impossible to get anywhere near them - even for a quick interview! Just as Rock Sound has followed the band's metamorphosis from boy to man, we've also been there for their journey out of the Cave and into the bright arena lights. Despite and early conviction that they'd make it somehow, it's not been without uncertainties along the way. Just after the release of Showbiz Matt said they were "a bit unsure about the way things are going, maybe it's a bit of fear in knowing that we are about to put ourselves through all this."

Having to deal with their contemporaries calling them "arrogant" and old friends saying they'd "changed" can't have been easy, yet, as the trio marched ever closer to becoming household names after a triumphant headline set at Glastonbury '04 (which was also marred by the death of Dom's father), the drummer admitted they still queried their capabilities: "Everything we've done, we've always questioned and gone. 'I'm not sure we can do this'. Like getting the chance to headline some of those huge festivals and being very nervous about it but then feeling like we've pulled it off. The success still feels surreal because that's the way we've always thought. We've never got too big for our boots and started thinking we can do things we can't. It always feels like we're just about getting away with it."

Hopefully, three years later, that feeling has evaporated, and with a string of prestigious awards under their belts, Muse are heading off for the biggest headline dates of their 13-year career Right now, they're looking pretty Invincible.

Local Teignmouth Magazine - Many Moons Ago (1995)

Who Do You Fancy For The Big One?

The Runners and riders for the Battle of the Bands final have now been confirmed. Sound Scene has prepared a little cut-out-and-keep form guide to tempt you to The Cav on Monday for one of the hottest nights of the year.

Bookies' Tip: Plymouth's Social Taboo stormed the first semi-final with the jaunty, happy-go-lucky boing through pop's golden back catalogue. If wide smiles and bouncy tunes were record sales, this lot would be on TOTP every week. Good for an each-way grin.

Young Pretenders: Teignmouth trio Muse look barely out of nappies. A disappointing outing in the semis saw them struggle to the final. Their more melodic take on grunge should see them jostling with the favourites.

Stalwarts: Exeter's Honey Sucks are Led Zeppelin to Muse's Take That. Trusty and reliable are two adjectives that spring to mind. Always worth a tap of the foot.

Outsiders: Tiverton's Johnny Heartbreaker and The Teardrops would be nowhere without their slightly bonkers but dandy frontman. But out of madness springs genius and who knows where these rock stallions will be places?

Go back to Rock Sound UK