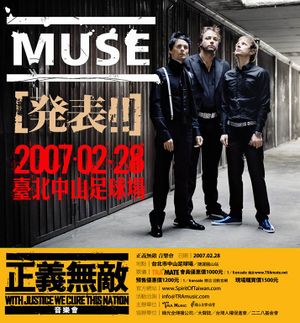 First Muse performance in Taiwan (and only to date).

Soldier's Poem and Take a Bow were in the set list but weren't played.[2]

Dominic Howard was presented with the NME award for Best British Band during the Stockholm Syndrome outro as seen at the NME Awards 2007. A video of this can be seen here: (watch).

At least six songs were recorded by SOUSOUS and can be found here in mp3 format. These are Hysteria, Map of the Problematique, Apocalypse Please, Starlight, Bliss and Stockholm Syndrome. A full recording is available here in mp3 format.