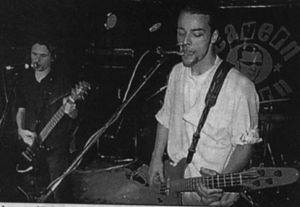 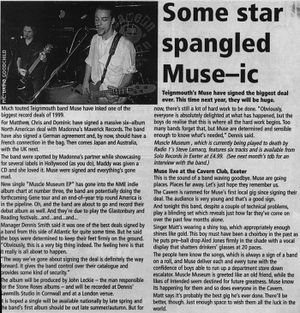 Teignmouth's Muse have signed the biggest deal ever. This time next year, they will be huge.

Much touted Teignmouth band Muse have inked one of the biggest record deals of 1999.
For Matthew, Chris and Dominic have signed a massive six-album North American deal with Madonna's Maverick Records. The band have also signed a German agreement and, by now, should have a French connection in the bag. Then comes Japan and Australia, with the UK next.
The band were spotted by Madonna's partner while showcasing for several labels in Hollywood (as you do), Maddy was given a CD and she loved it. Muse were signed and everything's gone mad.
New single "Muscle Museum EP" has gone into the NME indie album chart at number three, the band are potentially doing the forthcoming Gene tour and an end-of-year trip round America is in the pipeline. Oh, and the band are about to go and record their debut album as well. And they're due to play the Glastonbury and Reading festivals...and...and...and...
Manager Dennis Smith said it was one of the best deals signed by a band from this side of Atlantic for quite some time. But he said the boys were determined to keep their feet firmly on the ground. "Obviously, this is a very big thing indeed. The feeling here is that it really is all about to happen.
"The way we've gone about signing the deal is definitely the way forward. It gives the band control over their catalogue and provides some kind of security."
The album will be produced by John Leckie - the man responsible for the Stone Roses albums - and will be recorded at Dennis' Sawmills Studio in Cornwall and at a London venue.
It is hoped a single will be available nationally by late spring and the band's first album should be out late summer/autumn. But for now, there's still a lot of hard work to be done. "Obviously, everyone is absolutely delighted at what has happened, but the boys do realise that this is where all the hard work begins. Too many bands forget that, but Muse are determined and sensible enough to know what's needed," Dennis said.
Muscle Museum, which is currently being played to death by Radio 1's Steve Lamacq, features six tracks and is available from Solo Records in Exeter at £4.99 (See next month's tdb for an interview with the band.)

This is the sound of a band waving goodbye. Muse are going places. Places far away. Let's just hope they remember us. The Cavern is rammed for Muse's first local gig since signing their deal. The audience is very young and that's a good sign. And tonight this band, despite a couple of technical problems, play a blinding set which reveals just how far they've come on over the past few months alone.
Singer Matt's wearing a shiny top, which appropriately enough shines like gold. This boy must have been a choirboy in the past as he puts pre-ball drop Aled Jones firmly in the shade with a vocal display that shatters drinkers' glasses at 20 paces.
The people here know the songs, which is always a sign of a band on a roll, and Muse deliver each and every tune with the confidence of boys able to run up a department store down escalator. Muscle Museum is greeted like an old friend, while the likes of Intended [sic] seemed destined for future greatness. Muse know its [sic] happening for them and so does everyone in the Cavern. Matt says it's probably the best gig he's ever done. There'll be better, though. Just enough space to wish them all the luck in the world.

Go back to T.D.B Magazine