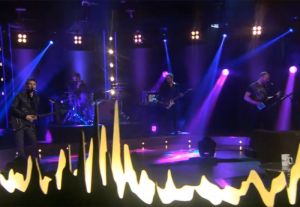 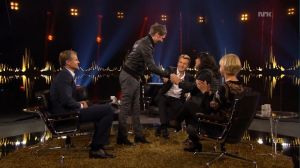 A TV show performance in support of the newly released single Madness from the then upcoming The 2nd Law.

Muse performed during episode 81 of Skavlan, which was broadcasted on the 14th of September on NRK TV.[2]

Madness was played live for the first time. This performance marked the debut for the Manson Matt Black and the Status Kitara Doubleneck Bass.

During the first take, when Matt was about to sing, he mixed-up/forgot the lyrics and they had to restart the performance. The fail was followed by Dom doing a "ba dum tss". (watch)