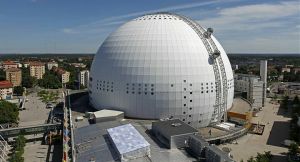 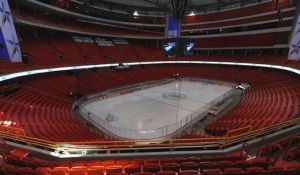 Ericsson Globe, also known as Globen in Swedish and formerly known as Stockholm Globe Arena (renamed to Ericsson Globe in 2009 after Ericsson, a Swedish telecom company acquired the arena), is a multi-purpose indoor arena located in Stockholm Globe City, in Stockholm, Sweden. Designed by Svante Berg and Lars Vretblad, it is the largest hemispherical building in the world and was built between 1986 and 1989. It has a diameter of 110 metres and inner height of 85 metres. The volume of the building is 605,000 cubic metres. It has the capacity of between 13,850 for sports evens and 16,000 people for concerts but the capacity can be suited to accomodate each event. The Ericsson Globe represents the Sun in the Sweden Solar System, the World's largest permanent scale model of the Solar System. [1] It is owned by the City of Stockholm in partnership with SGA Fastigether and Stockholm Live.

The arena is primarily an ice hockey venue and is the former home arena of Allmänna Idrottsklubben Ishockeyförening (AIK IF) Hockey team, the Djurgårdens IF Hockey team and the Hammarby IF Hockey team. and the Swedish men's national hockey teams. It also hosted the Ice Hockey World Championships in 1989, 1995, 2012 and 2013 and the NHL Challenge Series in 2000, 2001 and 2003 and the NHL Global Series in 2019. The arena also hosts a variety of other sporting events such as the European Men's Volleyball Championships in 1989, the European Men's Handball Championships in 2002, the European Men's Baskteball Championships in 200 and more. Other events that took place at the arena include the Eurovision Song Contest in 2000 and 2016, the MTV Europe Music Awards in 2000, the 2012 Starcraft II World Championship Series European Finals, the Top Gear Live show and the Cirque Du Soleil Delirium show. The arena was also host to Melodifestivalen in 1989 and between 2002 and 2012. Musical acts who performed in the arena include Soundgarden, Pink Floyd, Gary Moore, Tina Turner, Janet Jackson, The Killers, Rammstein, Depeche Mode, Metallica (who set the attendance record of 17,303 in 2018), U2, Green Day, Eric Clapton, Lady Gaga, Eminem and more. The arena was also visited by pope John Paul II in 1989 in what was the first Mass to be held by a pope in Sweden. Dalai Lama and Nelson Mandela both paid a visit to the arena.