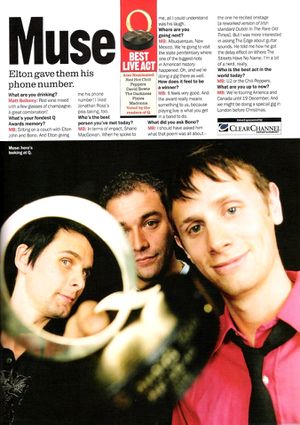 Elton gave them his phone number

What are you drinking?
Matthew Bellamy: Red wine mixed with a few glasses of champagne. A great combination!

What's your fondest Q Awards memory?
MB: Sitting on a couch with Elton and Bono. And Elton giving me his phone number! I liked Jonathan Ross's piss-taking, too.

Who's the best person you've met today?
MB: In terms of impact, Shane MacGowan. When he spoke to me, all I could understand was his laugh.

Where are you going next?
MB: Albuquerque, New Mexico. We're going to visit the state penitentiary where one of the biggest riots in America history happened. Oh, and we're doing a gig there as well.

How does it feel to be a winner?
MB: It feels very good. And the award really means something to us, because playing live is what you get in a band to do.

What did you ask Bono?
MB: I should have asked him what that poem was all about - the one he recited onstage [a reworked version of Irish standard Dublin In the Rare Old Times]. But I was more interested in asking The Edge about guitar sound. He told me how he got the delay effect on Where The Streets Have No Name. I'm a bit of a nerd, really.

Who is the best act in the world today?
MB: U2 or the Chili Peppers.

What are you up to now?
MB: We're touring America and Canada until 19 December. And we might be doing a special gig in London before Christmas.