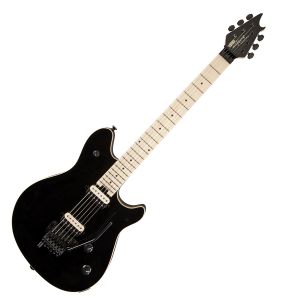 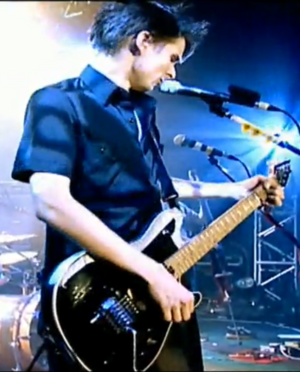 Matt and his EVH Wolfgang at the London Astoria

Peavey's EVH Wolfgang was a range of guitars built in collaboration between guitarist Eddie Van Halen and Peavey Electronics. The EVH stands for Eddie Van Halen, while "Wolfgang" is the name of Eddie's son. The guitar was produced between 1996 and 2004. It is the second EVH built right after the Ernie Ball Music Man one. The Peavey EVH picked up where the Ernie Ball Music Man EVH left off. This EVH puts even more emphasis on the off-set Gibson ES-335 design as opposed to the EBMM one, looking more like a single-cutaway guitar. In 2009, Van Halen announced the release of the new Wolfgang, built by Fender, but carrying his own EVH brand name. It features the same specs and attributes as the Peavey predecessor. The Fender-built EVH is still in production.

The Peavey EVH Wolfgang Matt used is a stock one, with an additional Roland GK2a Midi Pickup System installed. The guitar has 22 frets with a scale length of 25 1/2". Like most of his guitars used in that era, it has tape around the edge of the body.

It was featured in the Muscle Museum music video.

Matt supposedly had two of these guitars; one partially covered in grey tape (the one that was thrown into the crowd) and one completely covered in black tape.

Bellamy used this guitar during the 1999 and 2000 Showbiz tours.

Go back to Guitars