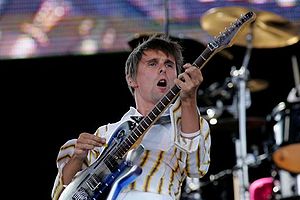 Muse were originally listed to appear on the UK stage, in Hyde Park, at around 17:20,[source?] but with constant line up changes made by Bob Geldof and the organisers, Muse were moved to the French stage, in Versailles, less than a week before the event took place.[source?] They performed four songs whereas most bands only played two or three songs, if that. Muse were on stage for approx. 17 minutes 46 seconds. Reasons as to why the band were moved from the UK to France are unknown.

At 1:36 during Bliss, Matthew Bellamy appeared to jump, but lost his footing and landed on his back.

The clothes that the band wore were considered quite 'unique',[source?] with Matthew Bellamy wearing a top which had a baby's bib effect on it and Dominic Howard wearing bright pink trousers. Christopher Wolstenholme also wore a brightly coloured floral print shirt.