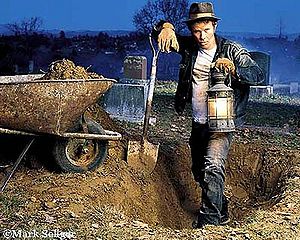 Matthew Bellamy got into Tom Waits around 1999 or 2000, after John Leckie introduced the band to his music during the recording of Showbiz.[1] In the period of 1999-2000 Bellamy had gone to a Waits gig in New York, which he described in 2000 as "one of the best gigs" he'd ever been to.[1] He confirmed that had been inspired by Tom Waits.[1]

For the Origin of Symmetry tour, the playback introduction music to concerts was What's He Building?. This can be heard on various audience recordings and on the Hullabaloo Soundtrack.

Matthew Bellamy claimed Tom Waits was one of his favourite singers: "He's completely opposite to what we sing, but I like him because he puts so much feeling in his music, takes on characters in what he's singing".

In an interview with Uncut magazine when asked what song Bellamy wished he had written he replied: "Blue Valentine" by Tom Waits. "I would like to have played the guitar part or have played anything weird on Mule Variations. I love Tom Waits because he's an artist who makes me not afraid to get old, and that's rare. I think it's a rare kind of thing to have that level of wisdom. And his lyrics are just astounding; everything in life is inside his lyrics."

More recently, he attended one of Waits' concerts at the Hammersmith Apollo, London on the 23rd of November 2004.[2] This was the first in the United Kingdom since 1987.[2]