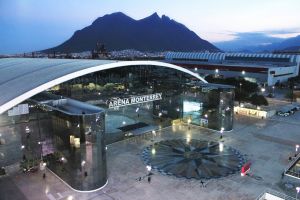 Arena Monterrey is an indoor multi-purpose arena, located in Monterrey, in the state of Nuevo León, Mexico. After a very slow start in the 90s when Mexico was hit by the economic crisis, the construction came to a complete halt by 1996, while in 2001, the government of Nuevo León announced that there were five groups of inverstors to take over the debt and finish the project. The arena opened in 2003 and has the capacity of 17,599. It's owned by Publimax México (who own 80%) and TV Azteca (owning 20%) and is operated by Zignia Live.

The arena was the home arena to Fuerza Regia of LNBP Monterrey La Raza and Monterrey Fury of MISL and Moterrey Steel of NAL. It is the current home arena to Monterrey Flash of MASL. The arena hosted the first WNBA game outside of the United States; Detroit Shock vs. San Antonio Silver Stars in 2004. In 2006 and 2009, it hosted two pre-season NBA games, the first one being Denver Nuggets going against Golden State Warriors and the second one being Philadelphia 76ers against Phoenix Suns. The arena also paid host to a few WWE, Total Nonstop Action Wrestling (TNA) and Lucha Libre AAA World Wide events. In 2015, the 8th Shito-Ryu Karate-Do World Championships were held at the arena.