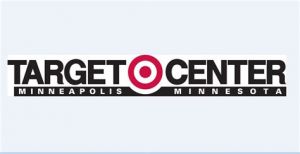 Logo of the arena 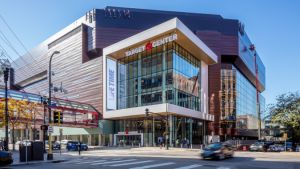 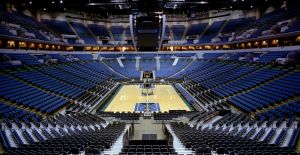 Target Center is an indoor multi-purpose arena located in the downtown area of Minneapolis, Minnesota. Ever since it's opening in 1990 it is named after Target Corporation, which is the original naming rights partner. The arena was designed by an archicetctural company called KMR Architects, Ltd.. It's maximum capacity sits at about 20,500 for concerts, 18,798 for basketball and 17,500 for hockey. The arena includes 702 club seats and 68 VIP suites. It's currently operated by Anschutz Entertainment Group and owned by the City of Minneapolis.

In 2004, the arena went under a major renovation which saw the replacement of 19,006 seats. An additional 1,500 new seats were also added to the existing ones and the bowl was reconfigured to be more "fan-friendly". The renovation also saw the replacement of the scoreboard with a 2,7 by 4,9 metre video screen complete with LED signs. LED signage was also added to the upper deck fascia. A new lounge was also built (named Club Cambria) and access for fans with dissabilities was improved. In 2007, the original parquet floor was replaced and in 2009 the arena got it's green roof, making it the first arena to get one. In 2015 through 2017, Target Center went through a second renovation, which included upgrades of the exterior, seats, technology and loading bays and imrpoovements of other areas.

Target Center is the home arena to Minnesota Timberwolves of NBA and Minnesota Lynx of WNBA. It is the former home of Minnesota Arctic Blast of RHI, Minnesota Moose of IHL, Minnesota Fighting Pike of AFL and Minnesota Valkyrie of LFL. Through the years, it hosted various NBA, WNBA and other league games, including the 1994 NBA and the 2018 WNBA All-Star Games, the 1995 NCAA Women's Final Four, the 2000 NBA draft and the 2011 WNBA Finals. It also hosted six neutral-site games during the 1993/94 NHL season and several IHL games between 1995 and 1996. Additionally, the arena also paid host to several WWE events such as the SummerSlam 1999, the Bragging Rights 2010 and the Elimination Chamber 2014.

Musical artists who have performed inside the arena include Billy Joel, Elton John, Metallica, Foo Fighters, Prince, U2, The Moody Blues, Ozzy Osbourne, Rush, Rage Against The Machine, Gorillaz and more.