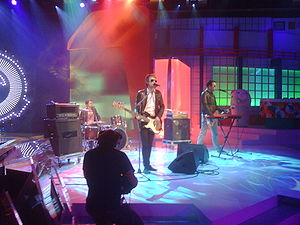 An Italian TV show promo in support of The Resistance. Last show before the start of the U2 tour.

The performance turned out to be one of their most iconic moments and can be seen here.

Q: So your new album (The Resistance) it's been completely recorded between Milan and the lake of Como... you love our country, why you love Italy??
A: It's a beautiful country, we love to be here.. and our drummer Matt lives in Como, so we built a studio in Italy, we had a lot of fun.... you can have a lot of creativity!
Q: I know that one of you has an italian girlfriend, a psychologist... right?
A: Yeah, our drummer..
Q: What is better? Clooney's house or the drummer's house??
A: I think George's is better... it is huge....
Q: I had read that you love simphonic music, you have a 40 pieces orchestra here in Milan, why this mix between rock music and orchestral music?
A: The band had a kind of influence by the piano and artists such as Chopin and Rachmaninov so we tried tho take an orchestra to do something different from the past... it's been amazing
Q: You talk a lot about apocalypse and real problems, your album came out on 9/11... don't think it's just a coincidence..
A: Oh no it's just a coincidence.. someone thinks about a conspiracy but we are in a different time, the world is different and there were no messages with the album release date.