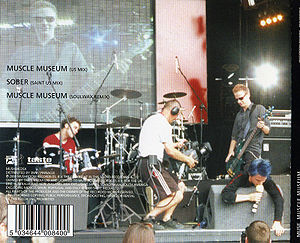 Muscle Museum US CD2 back cover

A miming performance, with live vox.[2] Christopher Wolstenholme and Dominic Howard switched instruments.[2] Originally, the performance was intended by the organisers to have been completely mimed, however Matthew Bellamy managed to persuade the organisers to allow him to sing the vocals live.[2] After tapping on the microphone, the backing track was cut, at which point Bellamy exclaimed "WOOAH!", after which it continued. However, Bellamy decided not to go on. The second song, Unintended, was not played.[3] He considered the event to be a farce.[2]

The event was organized and broadcast by BBC Radio 1.[2] An audio and video recording of this show was made by BBC. Even though the video has never shown up (it was probably recorded for the screens on the stage), the audio recording can be found here[registration needed]. An amateur video of part of the performance appeared on the Internet in late September 2008 and can be found here. It is, to date, the only video from the performance that has ever surfaced.

A picture from the show is on the Muscle Museum US CD2 single back cover.

Matthew Bellamy on the performance

Matt warned fans in advance that if they were expecting something great, stay home.

"wow! that was fucked... we just did that ONE BIG SUNDAY thing for radio one... what a farce! we turned up only to be told we had to mime, so we said no...then they said that mansun and JJ72 were miming, so we had to... well, i said, at least let me do the vocal live and they said ok... but! when we went onstage there was none (i mean absolute zero) vocal monitor, and it was so sudden we didn`t even have our instruments, so dom ended up on some strangers bass whilst chris decided to batter texas` drums and i had no guitar at all! and to top it off, when i battered one of their mikes they cut off the backing track and then started it again... basically it couldn`t have been more comical and disastrous, so we said fuck that and left before we were supposed to play another song... apologies to anyone who was expecting more than one song! cheers."