The arena's main facade, renovated in 2019 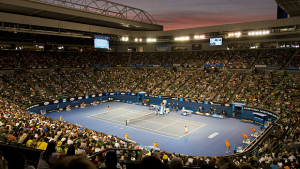 Interior of the arena

Rod Laver Arena (formerly known as National Tennis Centre at Flinders Park and Centre Court) is a multi-purpose arena, located in Melbourne, Victoria, Australia. The arena opened in 1995 and was renovated in 1995 and 2019. It was designed by architect Philip Cox and architectural group Peddle Thorp Learmonth. The arena's capacity is 16,200, making it the second largest Australian arena, after Sydney's Qudos Bank Arena. The Rod Laver Arena has been built as a replacement to the Kooyong Stadium, a tennis venue with the then-capacity of approximately 8,500. The Rod Laver Arena was the first arena in Australia to have the retractable roof installed and is the largest arena without a permanent roof. Since 2000, the arena is named after Australian former tennis player Rod Laver.

The primary function of the arena is hosting tennis games. It's the main arena of the Australian Open, one of the most known tennis tournaments and the first Grand Slam tennis tournament of the calendar year. Apart from tennis, the arena also hosted several basketball games with former tennants including Melbourne Tigers, South East Melbourne Magic and Victoria Titans, all of NBL. In 1997, the arena hosted the FIBA Under-22 World Championship, while in 2015, it hosted the 2015 FIBA Men's Oceania Basketball Championship. Other events that the arena paid host to include the 12th FINA World Aquatics Championships in 2007, with a temporary pool, named Susie O'Neill Pool, being built. The arena was the host venue for gymnastics during the 2006 Commonwealth Games. Several wrestling events from WWE. World Championship Wrestling and UFC have been held at the arena. In the summer of 2019, it featured three major regional esports tournaments across League of Legends, Overwatch and Rainbow Six Siege.

Music artists who performed at the Rod Laver Arena include Justin Timberlake, who set the attendance record in 2007 with 16,183 visitors, Arctic Monkeys, Coldplay, Queen + Adam Lambert, Motley Crue, Ariana Grande, John Mayer, System of a Down and more.