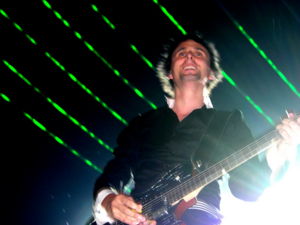 The City of Delusion trumpet solo was played on a melodica by Nicholls[6]. The lyrical variation in Starlight was present.

Howard said "How's it going out there Madrid?" before Bellamy's attempt of speaking Spanish mentioned above. After Matt's failed speech, Howard appears to have said "That's... pretty good".

SOUSOUS recorded the whole gig using a MiniDisc recorder. First, Bliss, Invincible, Starlight, Stockholm Syndrome and Muscle Museum were shared. These were initially available from an unlinked folder on his web site, these were later uploaded to Muselive.com, and are available here. A year after, the rest of the gig was shared and can be obtained here.

Some YouTube videos were remixed into asf containers and along with two videos uploaded to [1] by 'KoBe' and have been uploaded to Muselive.com, available here.

Another video of some of the songs has been uncovered on Google Video here. Using KeepVid, this video can be downloaded in either an avi or an mp4 container.