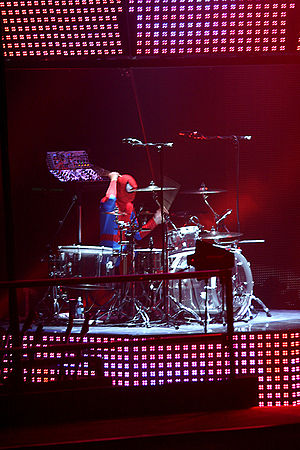 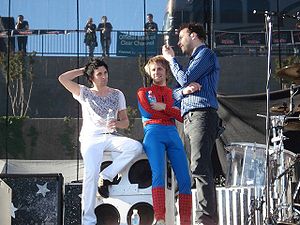 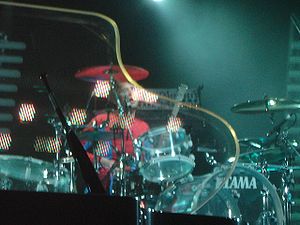 Howard seems to like Spiderman. During the gig in Bordeaux (France), on 31st October 2006 he wore a Spiderman disguise because it was Halloween. Then, during the last gig of 2006 in Antwerp (Belgium) on 19th December 2006, he wore it again. In both of them, Howard wore the whole disguise for the first song (Take a Bow) and then he took off the mask for the rest of the gig. The following year on April 15th, Dom wore the Spiderman outfit, sans mask, at Edgefest 16 in Frisco, TX. Dom also wore the Spiderman outfit during the last 'private' show of the Black Holes and Revelations tour in Christchurch, New Zealand. Also at KROQ's Almost Acoustic Christmas (December 9th, 2007), the last gig of 2007 and the very last gig of the Black Holes and Revelations tour he wore the infamous Spiderman outfit again. On October 2nd, a picture appeared on Muse's Twitter with the caption "dom ponders some new clothes".

Also during the gig in Cardiff (UK) on 12th November 2006 a fan was dressed as Spiderman, and before the band started Invincible, Howard stood up to dedicate the song to that fan.

In March 2007, Blender Magazine published an article about how they gave Muse 848 dollars to spend with The Like in Las Vegas and how Muse bought an inflatable castle, mushrooms and costumes. One of these was the Spiderman one.