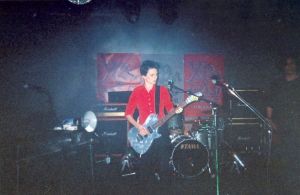 Matt at the gig

A performance for Xfm, the first of the Origin of Symmetry era.[2]

The first known out-of-studio performance of "Citizen Erased", and the first recorded "Micro Cuts". It is also the first time the Manson Delorean was used in public.

The ending of Citizen Erased was played on guitar instead of piano, and Micro Cuts has a different ending too (maybe that was like the demo version from 2000). In Feeling Good Matt repeat his infamous "fucking fuck you" interlude.

Matthew Bellamy restarted "Plug In Baby" after a guitar problem and Micro Cuts was out of tune.[3]

*"Feeling Good" was not written by Nina Simone but by Anthony Newley and Leslie Bricusse.

A recording is available in mp3 format here[registration needed].

You can listen the full recording here [1] or below.

All songs of the show was played with the Delorean Manson