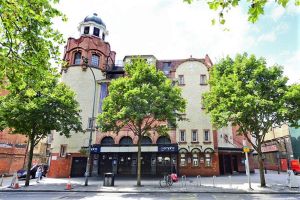 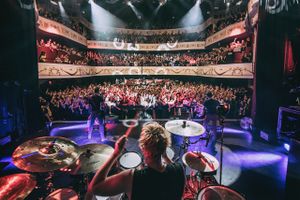 Muse performing at the venue in 2017

The building was built in 1903 under it's current name, originally as a music hall for Osward Stoll, an Australian-born British theatre manager and co-founder of the Stoll Music Group theatre company. The first performes at the theatre were The Fred Karno Troupe and Charlie Chaplin. The venue mainly hosted music hall entertainment such as variety performances all until the early 1950s, when the popularity of these forms of entertainment was at a decline. During the second world war, the Shepherd's Bush was nearly hit by a bomb, which just missed it, hitting the nearby Shepherd's Bush Pavillion instead.

The venue was, in 1953, purchased by the British Broadcasting Corporation, which put it to use as a television studio-theatre. The venue was renamed to BBC Television Theatre. Programmes which have been produced in the venue include Crackerjack, Juke Box Jury, Jim'll Fix It, That's Life! and The Generation Game. The venue also hosted the UK's national selection for the Eurovision Song Contest called A Song For Europe. The theatre was turned over for exclusive use by Wogan, a British talk show, which was broadcasted from the theatre three nights a week. In 1991, the BBC left the building.

In 1993, the building was taken over by enterprenour Andrew Mahler, who, through £1 million worth of refurbishments and improvements, re-opened the venue under the original name in 1994. The arena has hosted events since then. Musicians who performed inside the venue include King Crimson, who, in 2000, shot a live DVD called Eyes Wide Open inside the venue, Opeth, who also recorded their live DVD in 2003, called Lamentations aswell as Amy Winehouse, who recorded I Told You I Was Trouble: Live in London live DVD in 2007, Rolling Stones, Mumford & Sons, Pearl Jam, Ed Sheeran, Gary Numan, The Cardigans, David Bowie, Chris Rea, Deftones, Smashing Pumpkins, Alt-J and more.