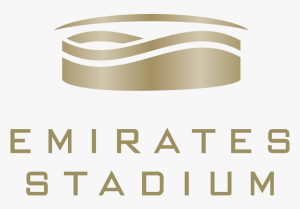 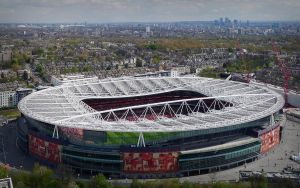 Emirates Stadium, known as Ashburton Grove before the deal with Emirates airlines, and also known as Highbury Stadium and Arsenal Stadium in UEFA competitions, is a football stadium, located in London, England. It is perhaps most known for being the home stadium to Arsenal, an English football club, whose former home was Highbury. It's capacity for football games sits at 60,704, making it the fourth largest stadium in England after Wembley Stadium, Old Trafford and Tottenham Hotspur Stadium. The capacity can go up to 72,000 for concerts. The stadium opened in 2006 by Prince Philip, Duke of Edinburgh as her wife, Queen Elizabeth II suffered an injury and couldn't carry on her duty. Because of that, in 2007, the Queen invited the chairman, manager and first team for an afternoon tea at the Buckingham Palace, making it the first time a football club was invited to the palace for an event like this. The stadium was designed by Populous (previously HOK Sport) architectural firm and was built as an expansion to the old stadium, keeping many of it's features.

In 2009, Arsenal FC began the program of "Arsenalisation" with an intention to turn the stadium into a "visible stronghold of all things Arsenal through a variety of artistic and creative means" and included the installation of white seats in the pattern of the trademark cannon, an installation of a shrine called "The Spirit of Highbury", depicting every player who played for Arsenal and an installation of eight murals on the exterior of the stadium, depicting four Arsenal legends linking their arms. Arsenal also renamed the main seating quadrants as the East Stand, West Stand, North Bank, and Clock End. As part of the club's 125th anniversary in 2011, Arsenal revealed three statues of former captain Tony Adams, record goalscorer Thierry Henry and manager Herbert Chapman outside of the stadium.

Events that took place at the ground include many of Arsenal's league and non-league friendly games aswell as a number of friendly international football matches such as the 2006 Brazil vs. Argentina game, the 2008 Brazil vs. Sweden game and the 2018 Brazil vs. Uruguay game. All of the international matches have featured the Brazil national team. Musical artists who have performed at the stadium include Green Day, Coldplay and Bruce Springsteen. Other events that the stadium hosted include a summit between British Prime Minister Gordon Brown and French President Nicolas Sarkozy in 2008. The stadium also served as an audition stage for shows such as The X Factor and Britain's Got Talent. In 2016, the stadium hosted Celebrity Masterchef, where contestants prepared food for club staff members.