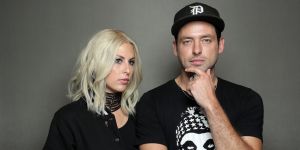 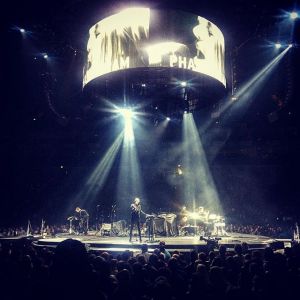 Phantogram opening for Muse at the O2 Arena (source)

The duo were friends since preschool. In 2007, after Barthel returned home dissatisfied with pursuing a visual arts degree in Vermont and Carter returned home after a brief stint with his brother's experimental band. they decided to work on finishing Carter's earlier songwriting ideas and formed a band called Charlie Everywhere. Under it, they released two EPs (Charlie Everywhere EP 1 and Charlie Everywhere EP 2, released in 2007 and 2008). In 2009, after signing a deal with an UK label Barely Breaking Even, they changed their name to Phantogram.

Phantogram's debut self-titled EP was released soon after, in 2009 on the CE Records label and was shortly followed by another EP, released in 2009, called Running From the Cops. In October 2009, they signed a deal with Barsuk Records. Their debut album, Eyelid Movies, was released in September 2009 in Europe and Canada and in February 2010 in the US. In 2011, they released another EP, called Nightlife.

2015 saw them contributing the song K.Y.S.A. to the Grand Theft Auto V soundtrack and making another collaboration with Big Boi, which resulted in a collaborative EP Big Grams, featuring production from the three together with hip-hop producer 9th Wonder and Skrillex. Barthel also made a guest appearance on Miley Cyrus's song Slab of Butter (Scorpion) from her 2015 album Miley Cyrus & Her Dead Petz. In 2016, they released their third studio album, simply called Three, which debuted on No. 9 on the Billboard 200 chart.

In 2018, the band released the single called Someday together with a cover of Sparklehorse's Saturday. The proceeds from the single were donated to the American Foundation for Suicide Prevention.

Through the years, the band performed with acts such as Future Islands, the xx, Beach House, Metric, M83 and Alt-J.

During their live shows, the duo added two additional members; In 2010 they enlisted Tim Oakley on drums and in 2013 Nicholas Shelestak joined on guitar/synth, with Oakley being replaced by drummer Chris Carhart.