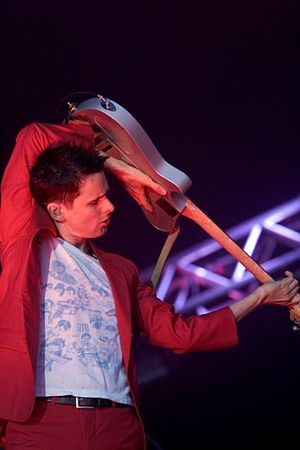 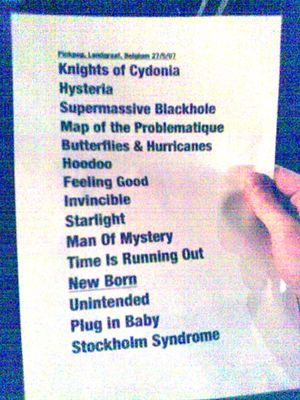 Muse were rumoured to be playing at Pinkpop Festival 2007, until 22nd January 2007, when Jan Smeets of Dutch radio station 3FM announced that Muse would appear at this year's festival.[2] Their set lasted about 1h and a quarter.[3]. The balloons were released during Plug In Baby.

It first appeared in a "Dutch music site": "Muse wil eigenlijk niet opgenomen worden, maar wil wel onze videoapparatuur gebruiken. Voor wat hoort wat en dus zijn we nu in samenspraak met Mojo een goede deal te maken.", which in English means "Muse doesn't want to be recorded, but they do want to use our video equipment. We are trying to make a good deal at the moment."[4]

After Hysteria Matt said "Thank you, we love your country". After Map of the Problematique he said "Dankjewel" ("Thank you"). He said "thank you" after Butterflies & Hurricanes, Supermassive Black Hole, Starlight and Unintended. Dom said "Thank you very much Pinkpop" after Hoodoo.