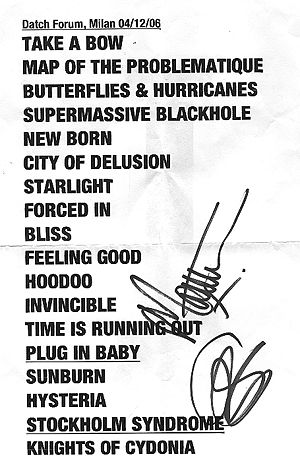 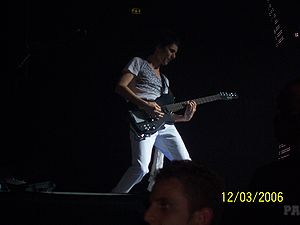 Before Starlight, Matthew Bellamy said in Italian "Questa è per la mia ragazza" ("This is for my girlfriend"), and dedicated the song to his girlfriend at the time, Gaia.[3]

Before Invincible, Dominic Howard said in Italian "Per la prossima canzone, tirate fuori i telefonini" ("For the next song, take out your phones"). However confusion arose in the crowd due to his mispronunciation. Bellamy also changed the lyrics, and he said "Saremo invincibili" instead of "Together we're invincible", as last sentence from the song.

Before Feeling Good, Bellamy dedicated it to people from Como in Italian. He said "Qualcuno da Como? La prossima canzone è per voi!" ("Anyone from Como? The next song is for you!")

A recording is available in mp3 format here[registration needed].