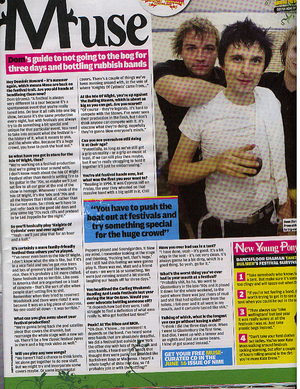 Hey Dominic Howard - it's summer again, which means Muse are back on the festival trail. Are you old hands at headlining them now?
Dom (drums): "A festival is always very different to a tour beacuse it's a spontaneous event that you're really tuned into. On tour it all rolls into one big show, because it's the same production every night, but with festivals you always try to do something a bit special and unique for that particular event. You need to take into account what the festival is - the history of it, what it means to you, and the whole vibe. Because it's a huge crowd, you have to push the boat out."

So what have you got in store for the Isle of Wight, then?
"We're working on a festival production that we're going to tour around with. I don't know much about the Isle of Wight Festival other than Hendrix setting fire to his guiter in the '70s, so maybe we'll just set fire to all our gear at the end of the show in homage. Whenever I think of the Isle Of Wight, it's the '60s and '70s and all the hippies that I think of, rather than its current state. So I think we'll have to just refer back to the good old days and pretend to be Led Zeppelin for the night."

So you'll basically play 'Knights Of Cydonia' over and over again?
"Yeah - we'll just play that for an hour and a half."

It's certainly a more fauinilly-friendly festival than others you've played.
"I've never even been to the Isle Of Wight. I don't know what the site is like, but if it's in a nice field and you've got nice trees and lots of greenery and the weather's nice, then it's probably a bit more chilled. Some festivals are so terrible. Like the ones in America that are organised on a load of concrete - that's the sort of vibe when people start setting fire to shit.
Remember when they tried to ressurect Woodstock and there were riots? It was because it was on a big piece of concrete. No-one could sit down - it was terrible."

What can you give away about your festival production?
"We're gonna bring back the pod satellite piece that covers the drumkit, but rearrange the whole stage with a new setup. There'll be a few classic festival pyros in there and a big rock video as well."

Will you play any new songs?
"We haven't had a chance to think lately, let along get together to do new stuff. But we might try and incorporate some covers maybe. Or some instrumental covers. There's a couple of things we've been messing around with, in the vein of where 'Knights Of Cydonia' came from..."

At the Isle Of Wight, you're up against The Rolling Stones, which is about as big as you can get. Are you scared?
"Of course - they're legends, it's hard to compete with the Stones. I've never seen their production in the flesh, but I don't think anyone can compete with it. It's obscene what they're doing. Hopefully they're gonna blow everyone's minds."

Can you see yourselves still doing it at their age?
"Potentially, as long as we've still got a grip on reality - or a grip on music at least. If we can still play then maybe, but if we're really struggling to hold it together it'll just be embarrassing."

You're old festival hands now, but what was the first you ever went to?
"Reading in 1996. It was Cypress Hill on Friday, the year they wheeled on that massive band with a big spliff in it. Chili Peppers played and Soundgarden. It blew my mind. I remember looking at the stage and thinking, 'Fucking hell, that's huge,' but I still had this feeling we were gonna play it. There was me, Matt and a friend of ours - we were 16 or something. We were just running around a bit stoned, laughing our heads of for three days."

You headlines the Carling Weekeng: Reading And Leeds Festivals last year during the War On Emo. Would you advocating bottling someone off?
"It depends how bad they were. I still struggle to find a definition of what emo really is. Who got bottled last time?"

Panic! At The Disco and MCR.
"Oh dear. Y'know... no comment! It depends on the band. I've heard some emo bands that are absolutely dreadful. We did a festival just outside New York and the other day with lots of those punk and emo bands, I heard terrible bands that thought they were punk, but sounded like Backstreet Boys or Madonna. I heard a whole bagful of shite that day, so I'd probably join in with the bottling!"

What's the worst thing you've ever had in your mouth at a festival?
"Probably shit, ha ha. We went to Glastonbury in the late-'90s and it pissed it down for the whole weekend, to the point where there was just rivers of mud and shit that had spilled over from the toilets, I fell over and it all went in my mouth. And it certainly tasted like shit."

Talking of which, what is the longest you can go without having a shit?
"I think I did the three days once. When I went to Glastonbury the first time. Bad diet. I went up with a tenner and an eight and just ate some beans. I kind of got stoned instead."