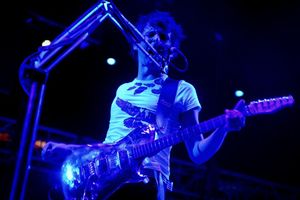 General ticket sale started on the 19th of August at 10:00. Tickets were available to be won from KROQ before that date.

The Debase solo again was played in its original form aside from different percussion, but contrary to reports that suggest otherwise, the solo was placed at the end of the song rather than in its original place.[1] Christopher Wolstenholme attempted some death grunt vocals during the Assassin solo that's on the album.

Dominic Howard screwed up before Time Is Running Out when he began to play Starlight along with Wolstenholme playing Time Is Running Out. Howard managed to stop playing in time. Matthew Bellamy improvised by playing a few more riffs.[2]

This show was broadcast from the AT&T Blue Room web site from 21:00.[3] This broadcast was ripped and is now available in an asf container - its original form - from Muselive.com. While the broadcast employed digital rights restrictions,[4] the ripper presumably used DRM cleaning software. The video is in WMV9, 400*300, 20fps, ~519Kbps. The audio is in WMA, ~31Kbps.

Based on AT&T Webcast