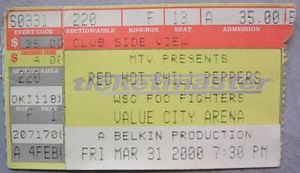 Muse opened for the Red Hot Chili Peppers w/special guest The Foo Fighters at the Value City Arena at the Jerome Schottenstein Center in Columbus, OH. The band performed a small acoustic set at the nearby Columbus Big Room on the same date as this event, the recording from which is one of the only recordings to surface from the 2000 American tour. The band performed Sunburn, Muscle Museum, and Cave at the acoustic performance.