An article concerning the A Seaside Rendezvous gigs.

All night queues for Muse tickets 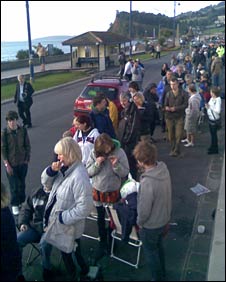 People queued overnight to snap up tickets for the homecoming gig

Hundreds of people have spent the night queuing to buy tickets for a Devon rock band's homecoming concerts next month.

Fans of Teignmouth band Muse began queuing on Thursday morning to be first in line for 5,000 tickets allocated for sale at the town's Carlton Theatre.

The £37.50 tickets were released on Friday at 0900 BST but hundreds have now appeared on web auction site eBay - with bids reaching £841 for one ticket.

Matt Bellamy, Dom Howard and Chris Wolstenholme, who make up the band, will play to nightly crowds of thousands at two open air concerts on the resort's seafront on the first weekend of September.

As well as tickets going on sale in Devon, they were also released at the same time through a number of websites.

Chris Wolstenholme, who plays bass, saw people queuing for tickets when he was out in Teignmouth on Thursday evening.

"Last night I came down and went to a few pubs and people had started queuing to get their wrist bands," he said.

"There was this really positive feeling in the town that something really good was happening. 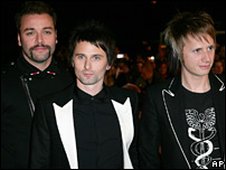 "The Teignmouth concerts are going to be a very proud moment for us.

"This is a really nice opportunity for us to give something back to the town where we all grew up - it's something we have wanted to do for a long time."

The band, which formed in 1994, has scooped a number of awards from music industry institutions over the years, including BRIT awards, NME awards and MTV Europe Music awards.

Last year its members were also awarded Honorary Doctorates of the Arts by Plymouth University for their contribution to the arts.

They have also been involved with Teenage Cancer Trust, playing at the Royal Albert Hall to help raise money for the charity.