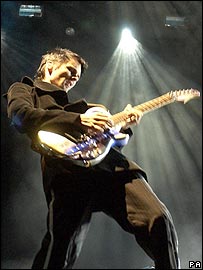 Muse's success is based on their album Black Holes And Revelations

Welsh rock features heavily on the list, with Bullet For My Valentine, Funeral For A Friend and Lostprophets in contention for multiple titles.

More than 140,000 votes were cast to determine the nominations, from readers of Kerrang!'s magazine and website.

Users of the internet community site MySpace.com - which hosts profiles of a number of the nominated bands - were also voters.

Overseas acts My Chemical Romance, Fall Out Boy, Trivium, Avenged Sevenfold, HIM and Lacuna Coil are shortlisted for best band on the planet 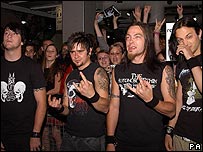 Bullet For My Valentine are nominated for four awards

Hundred Reasons, Lostprophets, Bullet For My Valentine, Funeral For A Friend, and Fightstar - the group fronted by former Busted singer Charlie Simpson - are nominated for best British band along with Muse.

Green Day, who walked off with the award for best band on the planet at last year's ceremony, are in the running nominated for best video for Jesus Of Suburbia.

Rock veterans the Red Hot Chili Peppers are also shortlisted in that category.

The magazine is celebrating its 25th anniversary this year and plans to base the ceremony around the idea of a "twisted carnival."