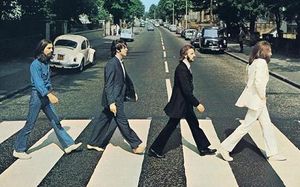 "The Beatles walking on the Zebra Crossing outside Abbey Road Studios"

Abbey Road Studios are based in London, England.

There have been numerous acts from many decades whom have recorded albums/singles/EPs in these studios, including that of Muse. The studios were established in November 1931 by the Gramophone Company, and are presently owned by EMI Records.