MuseWiki, wiki for the band Muse
(Redirected from AIR Studios)
Jump to navigation Jump to search 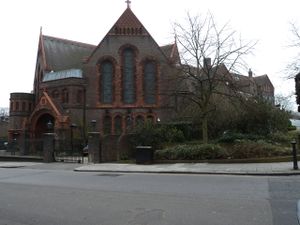 AIR Studios or AIR Lyndhurst Hall in London, UK is a music studio complex in Hampstead, London. The building used to be a church, called the Lyndhurst Hall Congregational Church, originally built in the late 19th century and designed in 1880 by Alfred Waterhouse, a Victorian architect. In 1991 through 1992, the building was refurbished and revamped as a recording studio. The building is owned by Associated Independent Recording (which is where the abbreviation AIR comes from), founded in 1965 in London by Sir George Martin and his partner John Burges. Their first studios opened in Oxford Street in 1970 before moving to Montserrat Island in the West Indies at Caribbean Sea. The island was hit by Hurricane Hugo who did severe damage to the building, forcing it to close. AIR then opened the Lyndhurst Hall complex in London who still operates today, despite being under threat for closure in 2015 by a nearby redevelopment work for a private property.

Muse have worked in Air Studios on nearly every album since Absolution, the only exceptions being Black Holes and Revelations and The Resistance.

After working on Absolution, the band moved back to the studios in 2011, rehearsing Origin of Symmetry in it's entirety for the Reading & Leeds festivals. In the same year, they also recorded most of The 2nd Law at the place. Before the recording began it was said during the interview[1] that Muse were to go working back in London so they could work and socialise on the sixth album together without having to move away from the families and travel a lot.

In 2015, Muse returned to the studios again, recording overdubs and doing final touches to Drones in Studios 2 and 3 and rehearse for the upcoming tours again.

In 2017, Muse returned again to record the demoes of the first three songs of what was to become Simulation Theory. While there, they also recorded New Kind Of Kick. The songs, at that time, were described as "a heavy one and two less heavy ones". One of the less heavy ones turned out to be Dig Down, elements of which were done at the studios. The heavy song was Blockades, while the third less heavy song is presumably Something Human. During that time, the Drones World Tour FIlm was mixed and mastered at the facility.

2018 saw them return back to AIR Studios to rehearse for the Simulation Theory Promotional Tour.