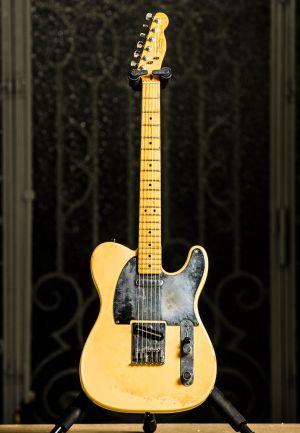 Bought by Bellamy in May of 2020, the guitar is the infamous "blonde Tele", used by Jeff Buckley himself, both live and in the studio. It's known for the worn and scratched custom mirror Carvin pickguard. Ever since Buckley died, the guitar was owned by his close friend until 2011, when he decided to sell it. It was acquired by Dan´s Chelsea Guitars from New York and was sold again a year later, bought by London guitar shop, before it was on sale again a few years later and acquired by Matthieu Lucas of Matt's Guitar Shop in Paris, which was the guitar owner until Bellamy noticed it in his shop several years before and eventually got it. Ever since Buckley died, the guitar has only been used live once by Alter Bridge's Myles Kennedy, when he covered "Hallelujah" at their concert in L'Olympia in Paris, in 2019. The guitar was lent to him by Lucas.[1]

According to Matt, he had a team of people making sure this was the right guitar and not a counterfeit copy, even interviewing Buckley's family. In an interview with Guitar World, Bellamy said he plans to use it on the upcoming album, saying “I haven’t bought it to hang it on the wall with a picture of Jeff saying, ‘‘I’ve bought it to actually attempt to use it and integrate it, and keep this guitar part of music. I’d like to believe that’s what he would have wanted.”[2]

Commenting on the sound of the guitar, Matt said “It sounds so weird - it doesn’t sound like any other Telecaster, I’ve had all the electronics analyzed - nobody’s changed anything - but the pickups, they think the neck pickup was a mistake by the manufacturer because for some reason it’s slightly out-of-phase, and there’s also something weird about the wiring." This prompted the team over at Manson Guitar Works to investigate the inner workings.

As mentioned above, the guitar is going to be used by Bellamy during the recording of the next major release. This section will be updated accordingly.