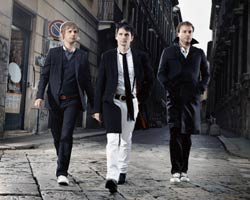 This morning (Monday December 4) at a specially assembled press conference, Muse have announced they will be playing the new 90,000 capacity Wembley Stadium on June 16 2007.

The band – frontman Matt Bellamy, drummer Dominic Howard and bassist Chris Wolstenholme – flew into London from Italy (where they’re on tour) especially for the conference which took place inside the nearly completed stadium itself.

While this may not be the first music event to take place at the venue, Muse are the first band to announce they will be playing at the brand new, fully refurbished stadium.

Bon Jovi (who were the last band to play at the old Wembley), Robbie Williams and The Rolling Stones were all scheduled to play at the new stadium last June, but the concerts were relocated, as financial, legal and construction difficulties have delayed the arena’s completion (it was orignally [sic] intended to be completed in 2003)

Xfm will be giving away a pair of tickets for the concert on the Lauren Laverne Breakfast Show on Tuesday morning (December 5). So listen in from 6am for details of how to win.

The announcement follows an incredible year for Muse which has seen them release the number 1 album ‘Black Holes And Revelations’, enjoy their biggest ever hits with the singles ‘Supermassive Black Hole’, ‘Starlight’ and 'Knights of Cydonia’.

The band also headed the Carling Reading and Leeds Weekend, playing a huge sold out UK arena tour (including two[1] nights at Wembley Arena) and have won Q Awards, Kerrang! Awards, MTV Awards and pretty [much] everything else.[2]

Go back to Xfm