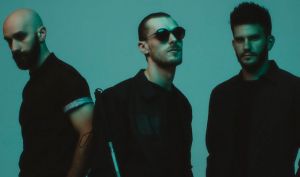 X Ambassadors (also stylized as XA) is an American alternative rock band from Ithaca, New York, found in 2009 as Ambassadors. The band consists of vocalist and multi-instrumentalist Sam Harris, keyboardist Casey Harris and drummer Adam Levin. The original line-up also included guitarist and bassist Noah Feldshuh, who went on an indefinite hiatus in 2016 to deal with personal issues. They're probably most known for songs such as "Unconsolable", "Jungle" and "Renegades".

In 2009, under their first name, the band released their debut EP called Ambassadors, which was followed a few years later by the debut LP called Litost, released in 2012. After Imagine Dragons frontman Dan Reynolds noticed them, they signed a deal with Interscope Records, releasing their second EP called Love Songs Drug Songs in 2013. The EP featured a track co-written by Reynolds himself. In promotion of the EP, they toured with Imagine Dragons, Jimmy Eat World and The Mogwils. In 2014, they released another EP called The Reason, following a support tour with Panic! at the Disco and Imagine Dragons. The band also featured in The Knocks' single Comfortable.

In June of 2015, the band released their second LP called VHS, which brought them even more international recognition and features track with Jamie N Commons and Imagine Dragons. The same year, they collaborated with Lil Wayne, Wiz Khalifa and Imagine Dragons on the song Sucker For Pain, written for the movie Suicide Squad. They've also collaborated with Skylar Grey on the song Cannonball.

In 2016, after touring with Muse, they started working on new material, and in 2017 they've released singles Hoping, Torches and The Devil You Know. They also featured on an Eminem song called Bad Husband and released the song Hope for the Netflix show Bright, featuring singers Bebe Rexha and Machine Gun Kelly. In 2018, they released a new single called Joyful, which was planned to be part of the album Don't Say, however the album was cancelled due to them already working on an album called Orion. The lead single of the album, Boom, was released in January of 2019 and the album itself was released in June of the same year.

Aside from work with his band, singer Sam Harris also worked with Lizzo on her recent album Cuz I Love You. He also co-wrote some songs on the For The Throne (Music inspired by Game of Thrones) compilation album, an album which also includes Pray (the latter one not being co-written by Harris).

X Ambassadors supported Muse during The Drones World Tour 2015/16, beginning with the 2016 Chicago gig, all the way through to the Paris gig. Additionally, they've also opened for Muse at the 2016 Eiffel Tower gig.