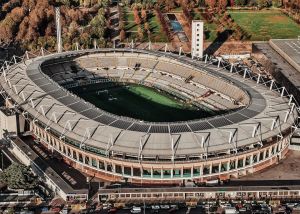 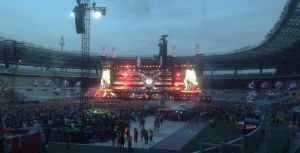 Muse performing at the stadium in 2013

Stadio Olimpico Grande Torino (English: Turin Grand Olympic Stadium), and previously known as Stadio Olimpico di Torino. Stadio Municipale Benito Mussolini (Benito Mussolini Municipal Stadium) and Stadio Comunale Vittorio Pozzo (Vittorio Pozzo Municipal Stadium) is a multi-purpose stadium in Turin, Italy. The stadium opened in 1933, built for the Games of the year Littoriali XI, and remained open until 1990 when it was abandoned in favour of Stadio delle Alpi. In 2006, the stadium was renovated and renamed to "Stadio Olimpico" or the 2006 Winter Olympics. The original capacity was 65,000, but it was brought down during renovations to just shy of 28,000, at 27,958, for safety reasons. For ceremonies, expansions using temporary structures were made to accomodate 35,000 more people. The stadium also got a commercial area, the center of sports medicine, offices and all hospitality services.

The north stand, named Curva Maratona (Curva Nord), translated to "Marathon Curve", is named after the Marathon Tower (Torre Maratona), located outside the stand, reserved for athletes participating in various kolous athletic contests. The stand itself is occupied by the Torino F.C. Ultras. The south stand or Curva Primavera (Curva Sud), translating to "Spring Curve", is named to honour the Torino youth teams. The east stand (Distinti East - The Distinguished East) includes a family sector and a sector for fans of visiting teams, and the west stand (Distinti Ovest - The Distinguished West), considered the most expensive stand, is reserved for journalists, commentators and prominent figures.

The stadium is the home stadium to Torino F.C. from the Serie A league, the Italian national league, and is former home to Juventus. Apart from many football games and the 2006 Olympics, it also hosted a 2013 end-of-year rugby union international with Italy playing against Australia. Some musical artists who performed at both the old and the new stadium include Bob Marley & The Wailers, AC/DC, David Bowie, Dire Straits, U2, Bruce Springsteen, Pink Floyd and more. The stadium also hosted the 1988 Amnesty International's Human Rights Now! benefit concert, headlined by Springsteen and the E-Street Band and featuring Sting, Peter Gabriel Tracy Chapman, Yossou N'Dour and Claudio Baglioni.