Top of the Pops (TV)

Top of the Pops Logo

Top of the Pops logo

Sunburn - March 2000 - Muse mimed (except vocals) as a four piece with someone on a grand piano. The single reached 22 in UK chart.

Plug In Baby - 23rd March 2001 - Introduced by Jamie Theakston as a "quite brilliant" live band. Full live performance. Matt has black hair and has a noticeable delay effect on his vocal. A slightly matured performance of one of their biggest singles which reached 11 in UK chart.

New Born - 15th June 2001 - Introduced by Jayne Middlemiss, Matt still has his red hair and muse perform a live shortened version of New Born which is Muse's 3rd biggest single to date. The performance ends with a fan doing a break dance in the middle of the stage and Chris sits on him. The single got to 12 in UK chart.

Bliss - 31st August 2001 - Presented by Jayne Middlemiss. Matt with red hair and flowers all over the stage, Muse performed live and were apparently bombarded with fans at the end of the song, while destroying the stage. The single reached 22 in the UK chart.

In Your World - 28th June 2002 - Presented by Sarah Cawood as "The Mighty Muse". Top of the Pops wrongly names the song "In Our World". The song was performed live with alternative beginning from the single with no piano. The single reached 13 in UK chart and is their 4th biggest single to date (double a-side with Dead Star).

Time Is Running Out - 19th September 2003 - Presented by Liz Bonnin and Richard Bacon. Performing one of their biggest singles in the UK to date, reaching 8 in the UK chart.

Supermassive Black Hole - 18th June 2006 - Presented by Reggie Yates with Annie Mac, The first release off the album reached 4th in the UK chart which is their highest UK singles chart position.

Starlight - 2nd July 2006 - Presented by Fearne Cotton and Reggie Yates, Starlight was broadcast to promote the release of the album Black Holes and Revelations. Reached 13 in the UK singles chart.

Top of the Pops Muse Special

Muse was featured on Top of the Pops special. All songs was broadcast on 30th July 2006.

Top of the Pops was then axed as of 30th July 2006. However, viewers could watch the full Top of the Pops 2006 session by pressing the red button on interactive TV in the UK just after the last show had finished. Starlight and Supermassive Black Hole was featured twice on Top of the Pops.

Tops of the Pops Muse Special:

According to a press release on the BBC website, Muse are to make an appearance on Top of the Pops christmas day special 2009.

'Top Of The Pops Christmas Day Special (25 December 2009, 2.00-3.00pm) offers up an hour of stellar performances from some of the year's biggest stars including Dizzee Rascal; Kasabian; Lily Allen; JLS; Alexandra Burke; La Roux; Sugababes; Florence and the Machine; Diversity; and Muse. The hour of top music and festive fun culminates in a glistening performance from this year's Christmas number 1!' 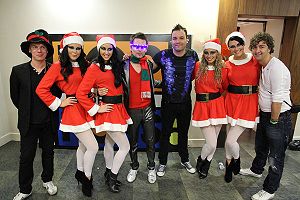 Muse at Top of the Pops Christmas Special