This Is a Muse Demo (demo)

MuseWiki, wiki for the band Muse
(Redirected from This Is a Muse Demo (compilation))
Jump to navigation Jump to search 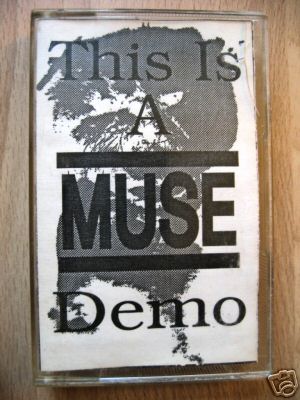 The first recording by Muse. This demo tape was put on eBay for auction some time in 2005.[2] The final bid, and winner, paid ≈500 GBP for it.[2] In one of Muse' cryptic messages, it was implied that Dominic Howard attempted to bid for it.[3] There are multiple copies of the tape, three are known in total, and at least one is known to be in the possession of a band member.[4]

The recipient of the tape (who is thought to be one of Dom's ex-girlfriends[5]) did not wish to share the recordings, and they are therefore not available. However, during the auction four samples of tracks 2–4 were released to confirm the tape to be genuine here.

On the 23rd May 2011, a user going by the name 'doctorhoover' posted on the Muse fan site MuseCollectors claiming to have found a copy of the tape – which he was given by Muse themselves in 1995 – in a box in his attic. He then confirmed it to be genuine a day later by posting a small YouTube video of the tape before also posting a small sample of the only track that had not yet been heard in the previous auction – Backdoor. After taking private bids for the tape via PM on several fan sites, 'doctorhoover' then posted the tape to eBay with a starting price of £2,600 on 6th June. Another collective effort between the websites – such as what happened with the Newton Abbot demo tape – was launched across several fan websites. After a nine-day listing, several bids came in in the last minute, including one from the collective effort, but the tape eventually went to an avid Muse collector for a grand total of £4,214 – the most of any Muse item thus far.

It is thought that Geobell is short for George Bellamy, and that he helped record the demo.[6] Matthew Bellamy either spelt his name wrong or 'Mat' was how he spelt his name at the time.[note 1]