Muse mesmerised their fans at an unforgettable concert on Sunday night.

If you weren’t at the Muse concert in Stadium Negara in Kuala Lumpur last Sunday night, then you missed catching what is easily the greatest rock band in the world. Those BBC and Brit awards didn’t lie.

If you think I’m kidding, just ask any of the 6,000-strong audience who attended the concert and they’ll tell you it was nothing short of “Awesome!” or “Incredible!” or “Unbelievable!” In fact, there should be T-shirts which read: “My Friends Went to the Muse Concert ... And All I Got Was This Lousy T-Shirt!” 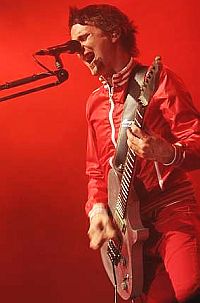 RIOT IN RED: Matt Bellamy leading the Muse charge in front of a sold-out concert at Stadium Negara.

Yes, it was that good. And to think there were only three guys (and a tour keyboardist) performing on stage ... words simply cannot describe it.

As far as experiencing a molten piece of alternative rock genius, this was the gig. It didn’t take long for the crowd to go ballistic and for the mosh-pit to swing into action once the lights went out in Stadium Negara at 8.40pm. Underneath the glow of atmospheric red lights, frontman Matthew Bellamy and band-mates – bassist Chris Wolstenholme and drummer Dominic Howard – stormed their way through and opened with the operatic Knights of Cydonia.

At that moment and right till the end of the show, everyone was mesmerised and hypnotised by Muse. Short of a religious experience, the concert saw the audience singing along to every song ... and the performance ... well, it was an adrenalin rush watching Muse unleash a monstrous romp. They had the rock energy and symphonic pretensions, and they played an incredible set with relentless frenzy.

Now Muse is not your typical rock act, in the sense that you can’t really pigeonhole them, even in the different branches under the rock genre. Their music has elements of classical, pop and metal, and they can fuse everything within a song. So one minute you’re waving your lighters to Butterflies and Hurricanes, lost in Bellamy’s dreamy, airy, falsetto vocals. Then, before you know it, the song shifts gears and suddenly you’re head-banging away before Bellamy relinquishes the guitar for a moment and hits the piano with a brief but classically inclined passage ... and then it starts all over again.

Of course there were songs which were just energy-driven, like Hysteria, Supermassive Black Hole, Assassin, Citizen Erased and Stockholm Syndrome, to name a few. Now I’ve listened to these songs on my CD player but watching and hearing Muse play right in front of me and the incredible sound they generated caused a surge in one’s system, and it wasn’t just me; everybody – including those who were seated – got up on their feet when the distinct opening riff to Plug In Baby came on.

For a band that has played at the world’s largest and best-known music festivals, this stop could have just been a routine set, but take nothing away from Muse in pushing themselves to the limit.

In KL, the fans had 19 tunes to savour, that's three more than Muse's gig in Singapore last month.

Visually, Bellamy was the main focus on stage, and he lived up to his rock ’n’ roll showman credentials. But I’m forgetting the other two guys who were responsible for driving the songs – Howard and Wolstenholme. Howard’s steady drumming grew more and more intense with every song and his rolls were tasteful and earth-shattering. Wolstenholme secured the bottom-end or the thunder, as I like to call it, with a variety of basses (he was changing basses for almost every song) but, more importantly, his playing style and use of effects was blistering. He was singing back-up vocals, too, on top of it all.

Bellamy was just amazing to watch. He assaulted our senses with raw distortion, shrieks, shrills from his guitar(s) all built in with effects and bleeding out of the PA.

When he took to the piano, he displayed just how much of a virtuoso he is on that instrument; he even put the piano through effects pedals, which was just jaw-dropping to hear.

With Bellamy on piano, the hard-rocking trio did an excellent version of the standard Feeling Good, which was made popular by Nina Simone.

When Muse said goodbye after playing Time is Running Out and New Born and left the stage, the crowd was screaming, “We want more!” over and over again.

And so they returned for the encore with not one or two, but four songs: Soldiers, Invincible, Stockholm Syndrome and Take a Bow.

A generous encore for sure, and Muse’s energy levels didn’t seem to drop a bit after playing a little over two hours. In fact they seemed to be getting more energised but in the end, they called it a night ... and what a night it was.

A limited tour edition of Muse’s Black Holes and Revelations, featuring a bonus live DVD, is available from Warner Malaysia.

Go back to The Star online