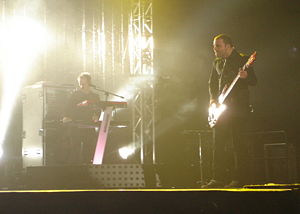 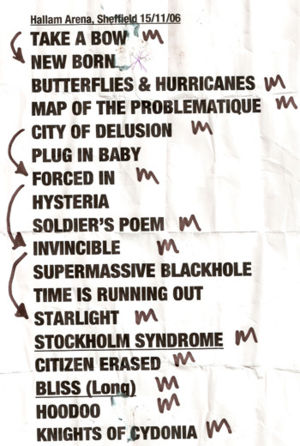 The Noisettes played 8 songs. The first was 'Scratch Your Name' and the second was 'Don't Give Up'.[7]

After Stockholm Syndrome's Riffs, Bellamy surfed on an amp but fell off (watch)

After the Maggie's Farm riff, Bellamy said "Thank you very much, cheers". After Soldier's Poem, "Thanks, thanks a lot". After Time Is Running out, he said "Thanks very much, how's it going in the back! ... yes. This next song is for you, this song is called Starlight". Before the last chorus of Knights of Cydonia, he said "Come on Sheffield". After Knights of Cydonia, "Thank you Sheffield!"

An audience recording is available in Monkey's Audio format here. The bootlegger used a Sony Sony ECM-DS70P microphone and a MD-MT831H MiniDisc recorder/player.[8] This bootleg was transcoded using LAME 3.97 into mp3 format and uploaded to Muselive.com and is available here.

The same bootlegger also recorded The Noisettes. This recording is available in Monkey's Audio format here.

Several videos which were recorded on a mobile phone have been uploaded to Muselive.com, and are available here.