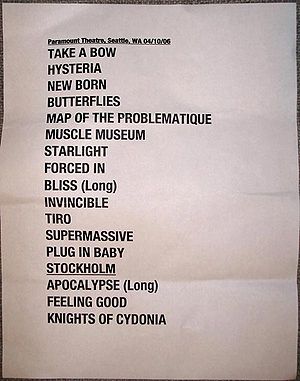 During Forced In, The Like went on stage in alien costumes, of which one "crowd boated" in an inflatable boat whilst the other two "cavort"ed on stage.[2] An audience recording can be watched here

A full bootleg is available in FLAC format here. This recording was made through a DPA 4061 into an iRiver H120.[3]

A partial video of the performance was also recorded, although the recorder was forced to stop during the show by security staff.[4]